Airschool's engineering team discovered that less is actually more when it comes to project management software. 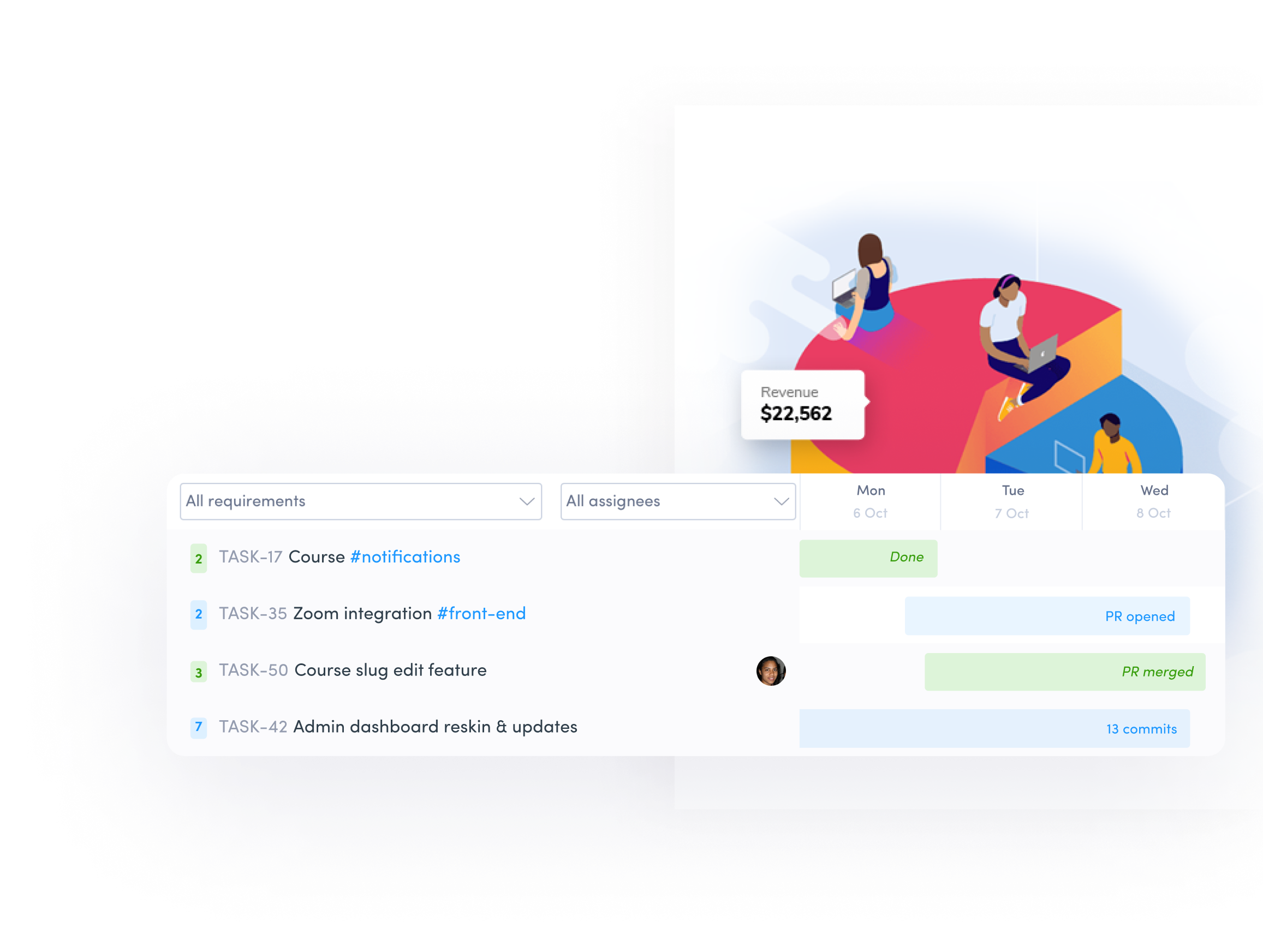 Founded in 2020, Airschool is an online edtech platform where subject matter experts -- from social media influencers to creatives -- can build, launch, and host courses. Self-described as a "Shopify for experts," Airschool lets users monetize their audiences through easy course creation tools, payment portals, powerful analytics, and other hosting must-haves -- all in one place. Airschool is a distributed, remote-first company with team members based around the world. 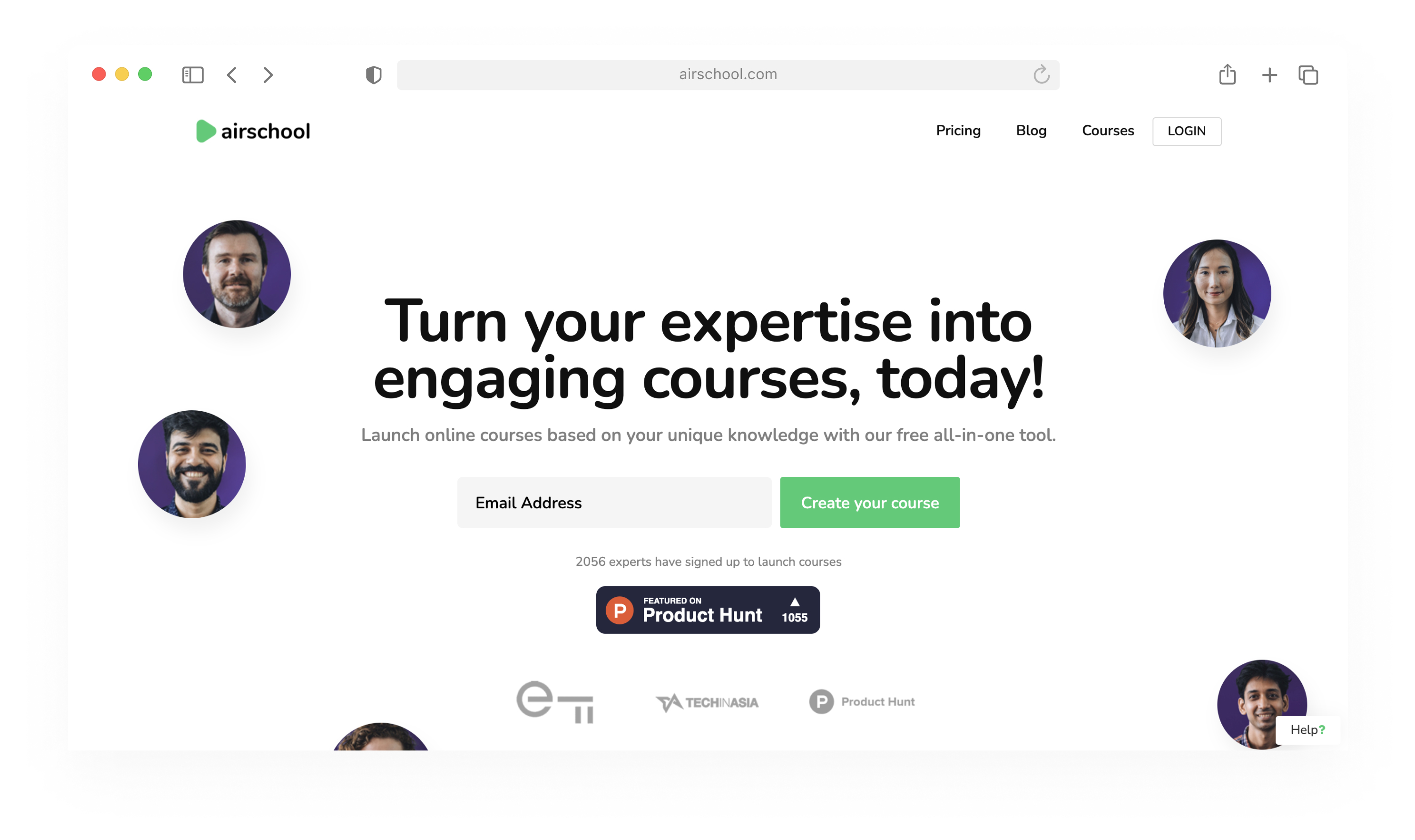 Siloed Tools - And Too Many of Them

After building their initial prototype in January 2020 and launching the following month, Airschool saw rapid growth in demand. To keep up with their increasingly large user base -- as well as remain competitive -- the company's small but mighty engineering team became hyper-focused on shipping as many new features as possible.

But moving fast also means breaking things, and on top of building out the platform, engineers were also resolving bugs and ensuring Airschool was up and running at all times.

To juggle it all, the engineering team found itself jumping back and forth between several disparate tools to manage their workload: Slack, Trello, Jira, and Asana. Trello's card structure made task details hard to fit in and organize based on priorities, while Jira had too many functionalities and options, complicating the user interface.

Cobbling these various tools together, the team was wasting a lot of time switching back and forth among tools, and items and messages would get missed. Searching the history of a task or conversation was challenging. The engineering team felt like they were managing the platforms rather than the platforms managing their work.

As a small startup with a lean team, they wanted a simpler solution that would help them get through sprints more efficiently. That encompassed the whole cycle - building, shipping, collecting feedback, and making feature improvements. They wanted a more streamlined solution without the bells and whistles, so when they found Tara on ProductHunt, they decided to give it a test drive.

"Other platforms have a complex interface, but Tara is a very simple, all-in-one solution. It's so simple that it makes onboarding new teammates easier." 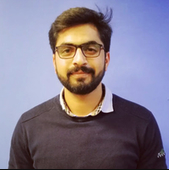 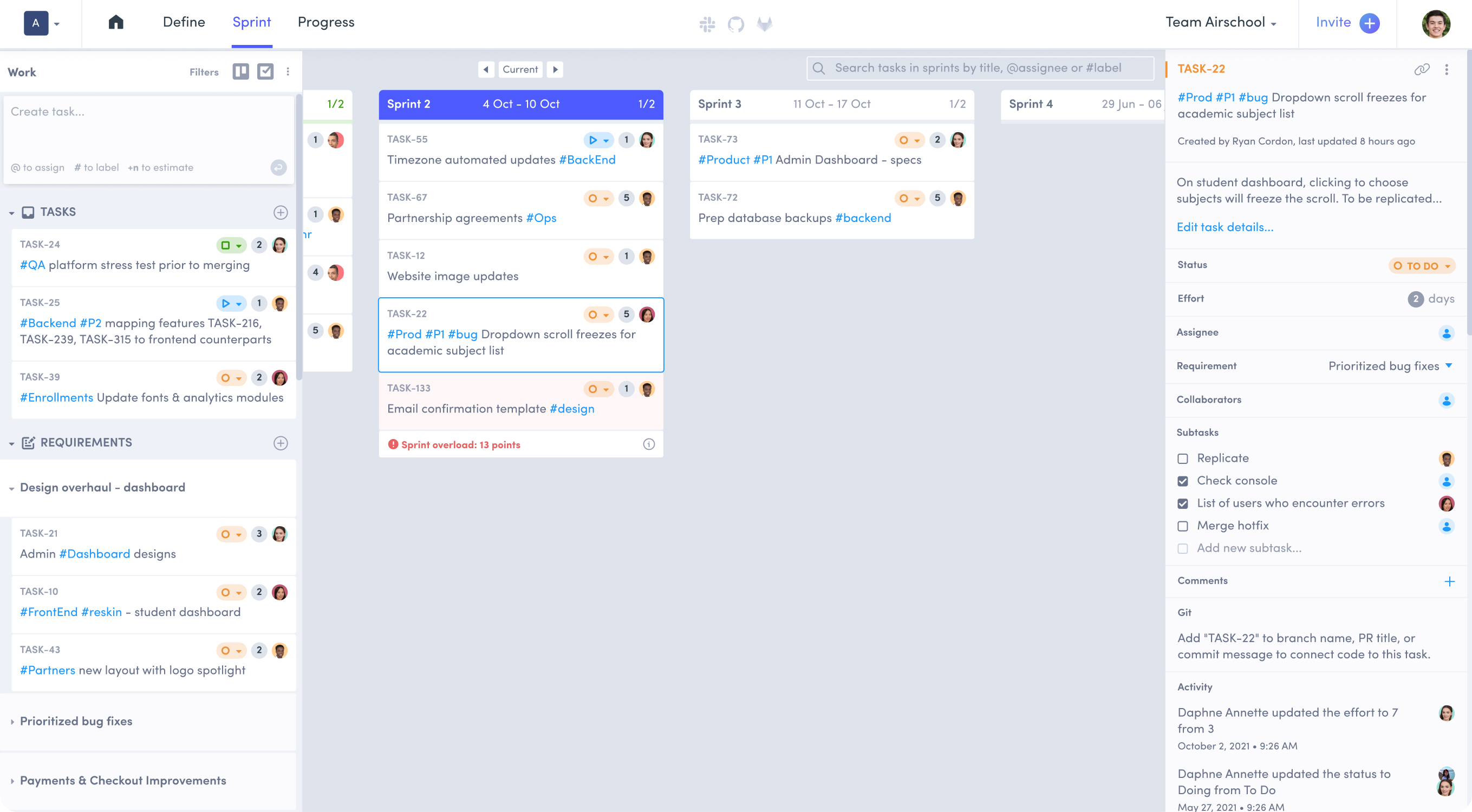 Because Tara's focus on sprint management matched Airschool's priorities, the team decided to see how a sprint setup within Tara would move them along.

After scoping a project, the team allocates tasks in Tara, and using the requirements feature, assigns tasks to individual engineers. Because Tara had fewer unnecessary requirement options than Jira did, the team found that creating requirements and technical specifications was more convenient.

The team stores rough ideas from team discussions within Requirements from which they write detailed technical specifications. Once the specs are complete, tasks are created under these requirements and assigned to different engineers and sprints - setting feature development into motion.

To improve collaboration, all communication happens through Tara -- including discussion notes -- which helps keep everything in one place. If there is an issue or a resolution related to a task, the assigned team members automatically receive a notification through Slack-- meaning they no longer have to worry about checking back for updates.

Because Airchool was shipping aggressively, leadership - which largely focused on customer-facing issues, couldn't always tell when the number of tasks in a sprint was overly ambitious for developers. To manage the constant flow work between feature updates and bug fixes, multi-sprint planning helped them better prioritize and get a better view of work.

Tara's smart effort estimates showed the team where they could work smarter and how to adjust the resources going into a given task. Since the system could gauge each engineer's workload, it was easy for leadership to get a clearer picture of who was doing what and if the goals they set were realistic. This feature quickly helped inform how the engineering team designed their sprints.

Tara's smart insights helped them better understand who was spending time on what. During the end-of-week sprint retro, the team uses Tara's “progress view” to examine what didn't work about that sprint. These insights revealed root causes of common problems -- someone may have created a task but never scheduled it, or that some developers may have been overloaded for a specific sprint.

"Tara was helpful in showing me how much time engineers were spending on every task, and giving me a good estimation of when my team was overworked and where we needed to reset our expectations." 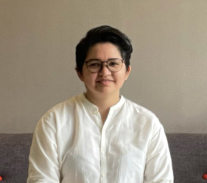 They could better organize their workloads by assigning tasks under specific buckets like Features or Bugs, for example, and organize on a more granular level using requirements to assign responsibilities. This was essential to their collaboration and for onboarding new hires. Since Airschool launched at the start of the pandemic, engineering team members had never met each other. But Tara helped this all-remote team get a clear overview of historical activity like the changelog, see how the sprints were designed, and understand the team‘s thinking about different features over time.

After deciding Tara was their platform of choice, the engineering team now starts each day with a standup meeting using Tara as their single source of truth. 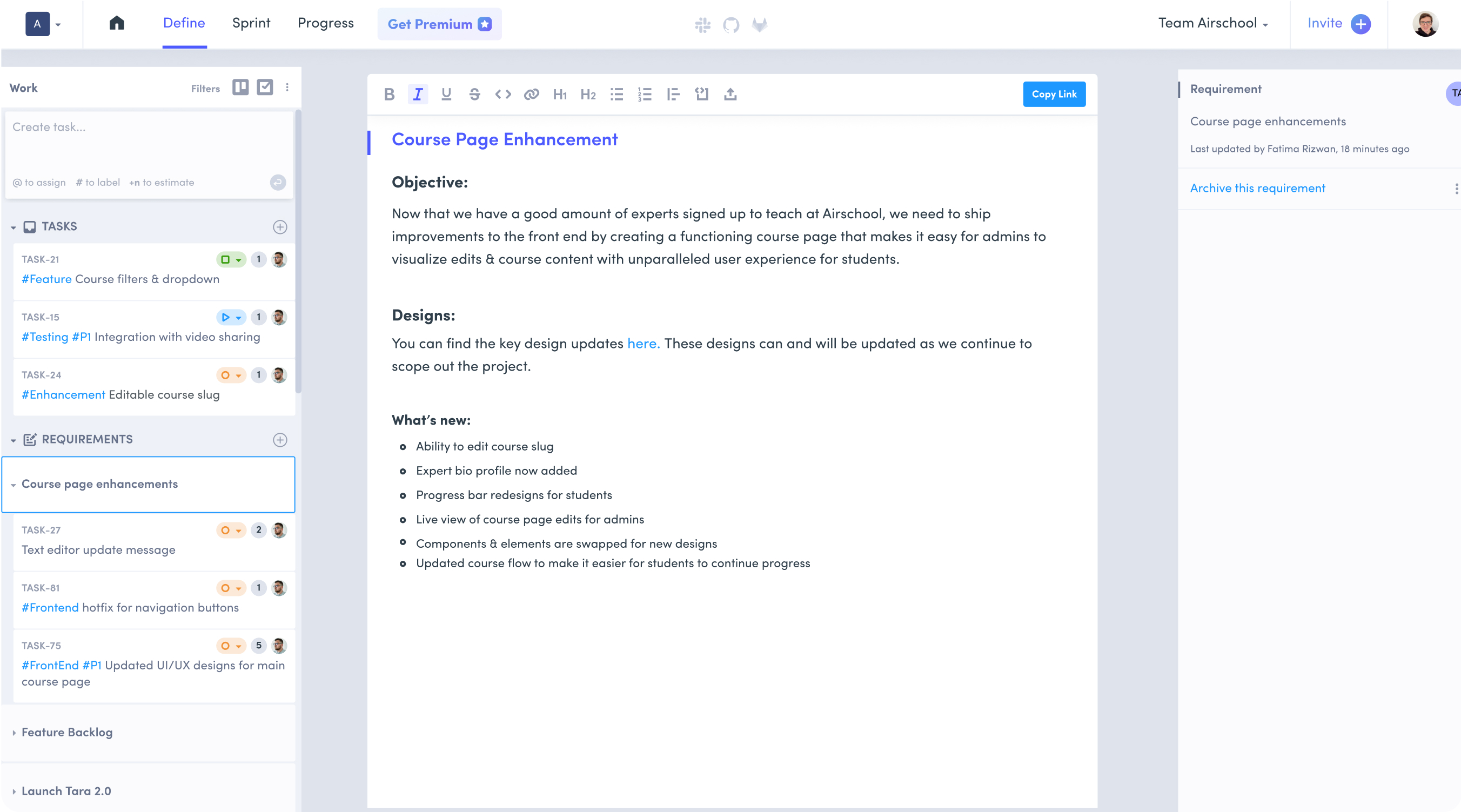 The amount of little improvements the engineering team saw in their work process have yielded undeniable benefits.

They no longer have to skimp on details for tasks or worry about missing messages. They have a more complete overview of their sprints, and at a glance can reference their entire task list -- making sure nothing is missed. This has been a crucial part of their ability to efficiently reprioritize tasks during more urgent incidents.

"It's been a great experience using Tara, and that's why we've stuck with it...we haven't thought about any other platform after using Tara."

Ship your next feature with Tara today.

From engineers to marketers - keep your team aligned in one simple workspace.

Get Tara for Free